Price and Revenue of a Monopoly firm 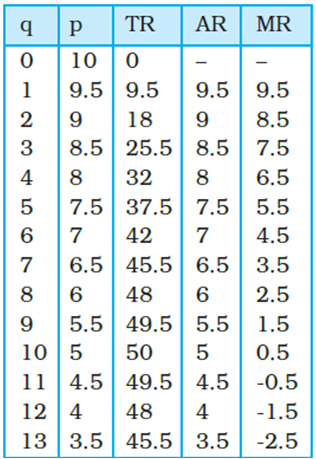 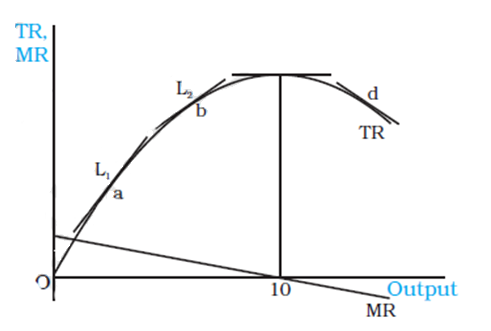 •The marginal revenue at any level of output is given by the slope of the total revenue curve at that level of output.
•At point ‘a’ on the TR curve, the value of MR is given by the slope of the line L1, and at point ‘b’ by the line L2. The line L2 is flatter than line L1, ie its slope is lesser.
•When 10 units of the commodity are sold, the tangent to the TR is horizontal, ie its slope is zero.
•The value of the MR for the same quantity is zero.
•At point ‘d’ on the TR curve, where the tangent is negatively sloped, the MR takes a negative value.
•Hence, when total revenue is rising, marginal revenue is positive, and when total revenue shows a fall, marginal revenue is negative.
Relation between Average Revenue and Marginal Revenue curves
•Fig shows that the MR curve lies below the AR curve
•If the AR curve is steeper, then the MR curve is far below the AR curve.
Marginal Revenue and Price Elasticity of Demand
•The MR values also have a relation with the price elasticity of demand.
•The price elasticity of demand is more than 1 when the MR has a positive value, and becomes less than the unity when MR has a negative value.
•As the quantity of the commodity increases, MR value becomes smaller and the value of the price elasticity of demand also becomes smaller.
•A demand curve is called
•Elastic at a point where price elasticity is greater than unity,
•Inelastic at a point where the price elasticity is less than unity and
•Unitary elastic when price elasticity is equal to 1.
•Table shows that
•when quantity is less than 10 units, MR is positive and the demand curve is elastic and
•when quantity is of more than 10 units, the demand curve is inelastic.
•At the quantity level of 10 units, the demand curve is unitary elastic.
Sort By Newest
Newest
Oldest