About the service
•The Indian Defence Estates Service (IDES) is an organized Group A Central Service under the Government of India in the Ministry of Defence.
•They manages and administers civil affairs of Cantonments through Cantonments through Cantonment Boards.
•These Boards are local autonomous bodies of self governance, with statutory status.
•The IDES officers are posted to these Boards as Chief Executive Officers.
•The Cantonment Boards are mandated to maintain schools, hospital, basic infrastructure (viz. roads, street lights, water supply etc.), wholesome environment and social security system in Cantonments.
History
•The Department came into existence on 16th December, 1926.
•The service was initially known as the Military Lands and Cantonment Service (1926-1983), and then Defence Lands and Cantonment Service (1983-1985).
•In 1985, the Service came to be formally known as the Indian Defence Estates Service.
Recruitment
•The recruitment to the Service takes place according to the Indian Defence Estates Service (Group ‘A’) Rules, 2013,
•Recruitment is 75% by direct recruitment and 25% by promotion.
•The Direct Recruitment to the Service takes place on the basis of the Civil Services Examination conducted annually by the UPSC.
Training
•The officers undergo Foundation Course at Lal Bahadur Sastri National Academy of Administration.
•Then they are imparted professional training at National Institute Defence Estates Management (NIDEM) at Delhi.
•The officers are confirmed to the service after successful completion of the probation period.
•There is also a provision for training of IDES officers across their entire service span.
•The officers are also sent to other training institutes for attending specific courses.
Functions
a) Management of Defence Lands measuring about 17.57 lakhs acres;
b) Administration of 62 Cantonment Boards
c) Develop Cantonments as modern townships
d) Acquisition, Hiring, Requisitioning of immovable properties for defence purposes;
e) Regular survey of defence land;
f) Regular audit of defence land inter-alia to optimize its utilization;
g) Maintenance of accurate, digitized record of lands, including regular updation;
i) Prevent encroachments and unauthorized constructions from defence lands,
j) Disposal of defence land;
k) Handling of litigation
Designation held by IDES Officers during Field Postings
(i) Chief Executive Officer (in Cantonment Boards)
(ii) Defence Estates Officer
Organizational Structure 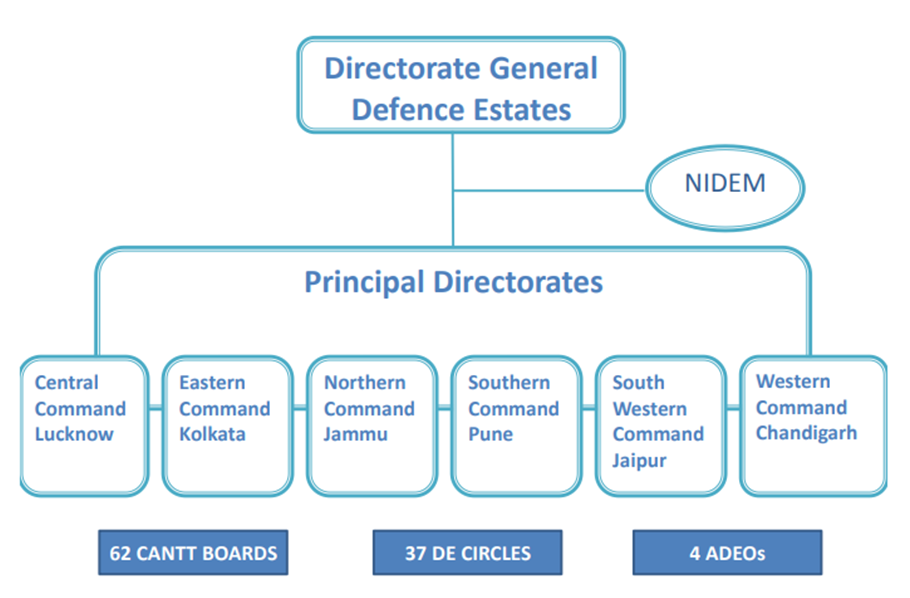 Designation in Director General and Directorate along with Pay Structure
Deputations
•The IDES officers can be appointed on deputation to Central Government, State Governments, Autonomous Organisation/ Subordinate Organisations, PSUs and under Central Staffing Scheme.
Specific Overview of IDES
•The offices are responsible for the management of the Defence Estates, so have considerable influence in the defense organization
•They get the best facilities as cantonments areas are quite well equipped by Government of India
•Their promotional prospect are not among the best, but quite decent
•They can enjoy many facilities of defense services though working as a civilian officers
•They enjoy good family and personal life
•They face virtually no political intreference in their career
References
•https://www.dgde.gov.in/sites/default/files/administration/SERVICE_PROFILE_dated_20-07-2016.pdf
•https://en.wikipedia.org/wiki/Indian_Defence_Estates_Service
Sort By Newest
Newest
Oldest