He, that plants trees, loves others besides himself


“He that plants tress, loves others besides himself” – the famous quote is from Gnomolgia (1732), a compilation of 6496 adages and proverbs by Thomas Fuller, an English physician. And in this world of changing climate and degrading environmental conditions, this cannot be more fitting. In this fast-paced day and age, when one lacks the time to do things for himself or herself, there are even fewer opportunities to reach out to other people. Investing in a tree is however the simplest form of doing something for own self and everyone else at the same time – it is risk-free and the long-term rewards are enormous. The essay shows the importance of planting trees and maintaining forest covers in the face of fast paced climatic problems.
Plantation in theology is described as virtuous work. The reason for this is that trees are very essential for life on earth. In India, people have come to worship trees like Tulsi, Peepal, Banana, Banyan etc. since ancient times. Today science has proven how important plants are for us. Importance of trees has time and again been reiterated:
·They are important because they give us fresh air to breathe, food to eat and shelter/shade from sunlight and rainfall.
·Besides this, there are many medicines in the market that are made up of tree extracts.
·They bring peacefulness, create a pleasing and relaxing environment.
·Also, they help in reflecting the harmful rays of the sun and maintaining a balanced temperature.
·They also help in water conservation and preventing soil erosion.
·They replenish groundwater and filter the air from harmful pollutants and odours.
·Planting of trees creates economic opportunities: harvesting, furniture construction, etc.
Forests and climate change
The UN climate change conference, renewed the world’s attention to what is commonly known as global warming, which most scientists say is caused by carbon dioxide and other greenhouse gas emissions largely coming from rich countries. Forests influence climate change largely by affecting the amount of carbon dioxide in the atmosphere. When forests grow, carbon is removed from the atmosphere and absorbed in the wood, leaves and soil. Because forests and oceans can absorb and store carbon over an extended period of time, they are considered ‘carbon skins’. This carbon remains stored in the forest ecosystem, but can be released into the atmosphere when forests are burned. Quantifying the substantial roles of forests in absorbing, storing, and releasing carbon is key to understanding the global cycle and hence climate change.
Forests store water during the rainy season and release it slowly, thus ensuring water flow during dry periods. The forests thus provide resilience to seasonal environmental and economic changes and long-term economic hazards like climate change. Aside from timber and fuel they also bring benefits to the agriculture, forestry and fishing sectors; the electricity and water sectors; the hotels and accommodation sector; and the public administration and defence sector.
A study published in Nature Climate Change, estimates how deforestation from the start of the industrial era to recent times has affected temperatures on the hottest day of the year for a range of countries. Deforestation is a key contributor to human-caused climate change. When forests are cleared or burnt, they release the carbon they store. Since 1990, around 129m hectares of forest – an area roughly the size of South Africa – have been chopped down by humans. Deforestation, along with other types of land use change, accounts for close to 11% of annual global CO2 emissions. From 1861-2000, deforestation accounted for 30% of CO2 emissions, according to the research. 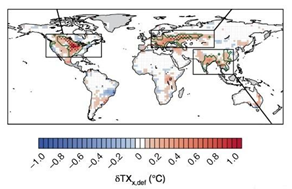 The image above shows the local effects of deforestation on hottest day temperatures in different parts of the world from 1981-2000, when compared to pre-industrial conditions. On the charts, red is used to show a net increase in the temperature on the hottest day of the year, while blue shows a net decrease. Boxes are used to highlight the results for North America, Europe, and Asia.
Causes of deforestation
·A large contributing factor to deforestation is the lumber industry. In addition, the increasing demand for low-cost timber products only supports the lumber company to continue logging. Deforestation is the main concern in tropical rainforests since they are home to millions of animals and much biodiversity.
·Livestock ranching requires large portions of land to raise herds of animals and livestock crops for consumer needs.
·The largest cause of deforestation and acute degradation is agriculture. According to research, more than 80% of deforestation can be contributed to agriculture. Forests are being converted to plantations for coffee, tea, palm oil, rice, rubber, and various other popular products. The rising demand for certain products and global trade arrangements causes forest conversions, which ultimately leads to soil erosion.
·Expansion of cities and urbanisation; need for space to expand housing and infrastructure.
What can be done to remedy the situation?
According to the United Nation’s Food and Agriculture Organization (FAO), the 33 million acres of forestland that are lost annually around the globe are responsible for 20% of human-caused greenhouse gas emissions. Trees are being destroyed at an alarming rate and the environment is being sacrificed for the sake of profit.
One small step by you leads to twenty or more giant leaps towards a global campaign against deforestation:
·As an individual or part of the global community, you can at least plant a tree to combat deforestation.
·Go paperless; switch to electronic modes
·Recycle, reuse and reduce
·Help reduce illegal logging, ensuring that you buy only sustainable wood products that are certified by the Forest Stewardship Council (FSC). The FSC is currently the best global standard in forest management, providing a system for interested parties to work towards responsible forest management.
·Do not use firewood: it takes a few hours to burn the firewood but takes years to grow a single tree.
·Respect the rights of indigenous people: preserving, promoting and elevating indigenous communities to their rightful place of prominence would help reduce deforestation. It makes more sense to grant them access to land, which was inherently taken away from them, to begin with, that they will be able to fight for the protection of their forests legally.
·Reforestation: is the natural or intentional restocking of existing forests and woodlands that have been depleted, usually through deforestation. It is the reestablishment of forest cover either naturally or artificially. Similar to the other methods of forestation, reforestation can be very effective because a single tree can absorb as much as 22 kilograms of carbon dioxide per year and can sequester 0.91 tonnes of carbon dioxide by the time it reaches 40 years old.
·Agroforestry: or agro-sylviculture is a land use management system in which combinations of trees or shrubs are grown around or among crops or pastureland. It combines agricultural and forestry technologies to create more diverse, productive, profitable, healthy, and sustainable land-use systems.
Forest Conservation in India
Forest is a ‘Concurrent’ subject under the legislative lists of the Constitution of India which means that both the Centre and States are competent to enact laws for forest conservation and use in India. There have been three forest policy announcements in independent India; the Forest Policy of 1952, The National Commission on Agriculture, 1976 (NCA) and the 1988 Forest Policy.
·The National Policy 1952 was formulated out of the need for a reorientation of forest policy in light of the changes that had taken place since the enunciation of the 1894 policy on forests. Forestry in India, whether state or privately owned, was classified into four categories of Protection Forests, National Forests, Village Forests and Tree Lands.
·The National Commission on Agriculture states that there should be a change over from the conservation oriented forestry to a more dynamic programme of production forestry. The NCA recommended that the national forest policy should be based on optimising forest resources for goods and services, preventing erosion and denudation, maximising forest productivity and augmenting employment potential for national prosperity.
·Forest Policy of 1988 (NFP) represented a major paradigm shift from the earlier policies and this shift began to take some shape through the introduction of Joint Forest Management in India in 1990 both of which are discussed in detail in a subsequent section of these notes.
Another important general framework of environment protection is provided under the umbrella legislation of the Environment Protection Act, 1986 and this law can be of a great value in sustaining legal action for forest conservation. The Environment Protection Act, 1986 was the response to a widely felt need for a general legislation for environment protection.
Conclusion
“Whoever has learned how to listen to trees no longer wants to be a tree. He wants to be nothing except what he is. That is home. That is happiness.” Trees have long been a subject of interest and a topic of discussion - and it's no wonder; they represent life, growth, peace, and nature. Trees provide us with many benefits necessary for survival, including clean air, filtered water, shade, and food. They also give us hope and insight, and courage to persevere – even in the harshest conditions. Trees teach us to stay rooted while soaring to great heights. Therefore it is nothing but true that when one plants a tree, they do good not just for their own but for everyone on the planet.
(Source: image – carbonbrief.org / Wikipedia.com / wwfindia.org)

Looking for a One-stop Solution to prepare for ‘Ethics, Integrity, and Aptitude’ and ‘Essay and Answer Writing’ for UPSC?