Buddhism was founded by Siddhartha Gautama in the sixth century BC. Born in a royal family, he was the prince of Kapilvastu and brought up in luxury. His parents ensured that he did not see any pain and suffering in his younger days.
Once, when Gautama was twenty-seven, he ventured out of the city gate and saw four instances or four sights that changed his life. These sights were:
1. An old man
2. A sick man
3. A dead man
4. A wondering monk
When he enquired from his charioteer about what he had seen, he explained that everyone gets sick some time or the other; everyone has to become old and then eventually die. When he saw the monk, Gautama had noticed that though the monk had renounced all worldly possessions, yet he was happy and peaceful, unaffected by problems of the world. It was then that Gautama decided to discard all luxuries and leave his palace to discover the truth about life which could provide humans freedom from suffering. He met many masters over the next six years and learned numerous spiritual practices. However, he was not satisfied. Finally, at Bodhgaya, he remained in the state of meditation for six days and nights and, got enlightenment. He thus became a ‘Buddha’, meaning ‘Enlightened One’. Thereafter, he taught the first Wheel of Dharma which included Four Noble Truths and other discourses.
Four Noble Truths of Buddhism
The Four Noble Truths are the essence of Buddhist teaching. These Truths are:
1. The truth of suffering (Dukkha)
2. The truth of the origin/cause of suffering (Samudaya)
3. The truth of the cessation of suffering (Nirodha)
4. The truth of the path to the cessation of suffering (Magga)
1. The Truth of Suffering
Suffering is an essential part of life. As long as we are alive, we can’t avoid suffering altogether. Everyone has to suffer illness, old age-related problems and finally death. However, once we accept suffering as a part of life, we won’t try to run away from suffering. Instead, we would try to find the cause of our suffering so that we can reduce or end it. Thus, once we are mentally prepared to accept pain as a part of life, our sufferings are considerably reduced as we take necessary steps to reduce our sufferings.
Suffering or dukkha (pain, anxiety and dissatisfaction) are of three types:
1. Dukkha-dukkha (Suffering of the body): The physical sufferings include the pain of childbirth, illness, growing old and death.
2. Viparinama dukkha (Suffering of change): The world is in a constant state of flux. We can’t stop the change and yet we are always concerned about our future. We are often anxious and feel stressed when we try to hold on to things that are constantly undergoing change.
3. Samhar dukkha (Suffering of conditioned mind): We often suffer due to our unrealistic ideals. When we find that the world does not measure according to our ideals, we suffer pain of frustration and dissatisfaction.
2. The Cause of Suffering
The Buddha explained that our suffering is never random because all suffering has a cause. We can thus manage our suffering by working on its causes.
Human suffering comes in three forms, which he described as the ‘Three Roots of Evil’, the ‘Three Fires’, or the ‘Three Poisons’. This is depicted in Figure 1.
In the above picture, the three types of suffering are displayed as:
1. Greed and desire (rooster)
2. Hatred or destructive urges (snake)
3. Ignorance or delusion (pig)
Each of the three reinforces each other. Hence, if we can manage even one of the three, we can gradually manage the other two as well without much difficulty. For example, if we manage to curb our desires, it will gradually lead to freedom from hatred and delusion.
3. Cessation of Suffering
Once we understand that every suffering has a cause, we can eliminate the suffering by striking at the root of its cause. According to the Buddha, suffering can be eliminated by extinguishing desires that cause suffering. The most important way for the cessation of suffering is the extinction of desires. Once we curb our desires, it leads to Nirvana, or Enlightenment. Nirvana extinguishes the three fires of greed, delusion and hatred.
Nirvana is a state of mind that brings profound spiritual joy, without negative emotions and fears.
Hence, someone who has attained enlightenment is filled with compassion for all living things.
4. The Path to the Cessation of Suffering
Human suffering can be eliminated by following the ‘Eightfold Path’ discovered by the Buddha:
1. Right Understanding: Accepting Buddhist teachings, karma and rebirth
2. Right Intention: A commitment to cultivate the right attitude
3. Right Speech: Speaking truthfully, avoiding slander, gossip and abuse
4. Right Action: Refraining from stealing, killing and overindulgence
5. Right Livelihood: Don’t exploit people, kill animals or trade in intoxicants or weapons
6. Right Effort: Cultivating positive states of mind; freeing oneself from evil
7. Right Mindfulness: Developing awareness about the body, feelings and mind
8. Right Concentration: Develop mental focus and practise meditation
The Eightfold Paths is often displayed in the form of a chakra (wheel) shown below. 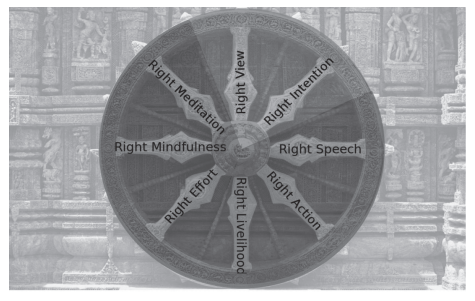 Middle Path of the Buddha
Gautama Buddha advised people to shun the path of extremes. He described the Noble Eightfold Path as the middle way of moderation, between the extremes of sensual indulgence and self-mortification. He had said,
Monks, these two extremes ought not to be practiced by one who has gone forth from the household life. There is addiction to indulgence of sense-pleasures, which is low, coarse, the way of ordinary people, unworthy and unprofitable; and there is addiction to self-mortification, which is painful, unworthy and unprofitable.
Avoiding both these extremes, the Tathagata (the Perfect One) has realised the Middle Path; it gives vision, gives knowledge and leads to calm, to insight, to enlightenment and to Nirvana. And what is that Middle Path realised by the Tathagata...? It is the Noble Eightfold path and nothing else…
The Buddha accordingly advised that we must regulate our cravings with self-discipline and fulfil the physiological and physical needs like food and clothing and enjoy minimum comfort.
Other Important Concepts of Buddhism
Buddhism is one of the most popular faiths in the world today. It has spread worldwide. The main reason for the popularity of Buddhism is that the teaching of the Buddha are based on rational thinking, which appeals to the modern man. The Buddha advised people to avoid blind faith and following any person’s words. The following quote summarises his thoughts:
Do not believe in what you have heard; do not believe in traditions because they have been handed down for many generations; do not believe in anything because it is rumoured and spoken by many; do not believe merely because a written statement of some old sage is produced; do not believe in conjectures; do not believe in that as truth to which you have become attached from habit; do not believe merely the authority of your teachers and elders. After observation and analysis, when it agrees with reason and is conducive to the good and gain of one and all, then accept it and live up to it.
His words of wisdom are popular today due to the truth contained in them. The other important life lessons of the Buddha can be summarised as follows:
• He advocated universal compassion, benevolence and kindness
• He was against animal sacrifice and rituals
• He was against the caste system
• He did not believe in God or Atman
• His did not favour theoretical contemplation and focused on practical wisdom
Looking for a One-stop Solution to prepare for ‘Ethics, Integrity, and Aptitude’ and ‘Essay and Answer Writing’ for UPSC?
Buy Dr. Awdhesh Singh’s books from the links below-
Ethics, Integrity & Aptitude for Civil Services Examination