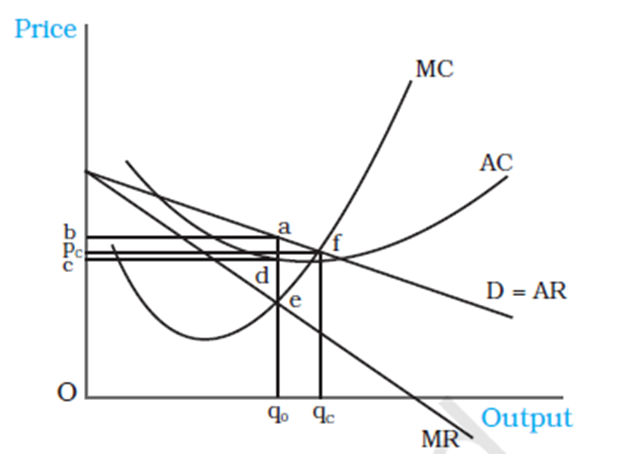 •If a firm believed that it was a perfectly competitive firm, then given its level of output at q0, price of the commodity at aq0 = Ob,
•Therefore, every additional unit of output could be sold at that price.
•Since the cost of producing an additional unit, given by the MC, stands at eq0, which is less than aq0, the firm would expect a gain in profit by increasing the output.
•This would continue as long as the price remained higher than the MC.
•At the point ‘f ’ in Figure, where the MC curve cuts the demand curve, price received by the firm becomes equal to the MC.
•Hence, it would no longer be considered beneficial by this perfectly competitive firm to increase output.
•It is for this reason that Price = Marginal Cost that is considered the equilibrium condition for the perfectly competitive firm.
Equilibrium level of output for perfect competition
•The diagram shows that at this level of output, the quantity produced qc is greater than q0 and the price paid by the consumers is lower at pc.
•Hence, the perfectly competitive market provides a production and sale of a larger quantity of the commodity compared to a monopoly firm.
•Further the price of the commodity under perfect competition is lower compared to monopoly.
•The profit earned by the perfectly competitive firm is also smaller.
Profit of monopoly firms in the Long Run
•With free entry and exit, perfectly competitive firms obtain zero profits.
•That was due to the fact that if profits earned by firms were positive, more firms would enter the market and the increase in output would bring the price down, thereby decreasing the earnings of the existing firms.
•Similarly, if firms were facing losses, some firms would close down and the reduction in output would raise prices and increase the earnings of the remaining firms.
•In the case with monopoly firms, it is not true since other firms are prevented from entering the market.
•Hence, the profits earned by monopoly firms do not go away in the long run.
Criticism of Monopoly
•A monopoly will typically charge higher prices than a competitive firm.
•Hence, monopolies are often considered exploitative.
•However, pure monopoly firms cannot exist in the real world because all commodities are, in a sense, substitutes for each other.
•Even a pure monopoly situation is never without competition because the economy is never stationary. New commodities using new technologies are always coming up, which are close substitutes for the commodity produced by the monopoly firm.
•Hence, the monopoly firm always has competition in the long run.
•Even in the short run, the threat of competition is always present.
Benefits of Monopoly
•Some experts argue that the existence of monopolies may be beneficial to society.
•Since monopoly firms earn large profits, they possess sufficient funds to take up research and development work, something which the small perfectly competitive firm is unable to do.
•By doing such research, monopoly firms are able to produce better quality goods, or goods at lower cost, or both.
•Hence, even if monopolies make supernormal profits, they may benefit consumers by lowering costs.
Sort By Newest
Newest
Oldest